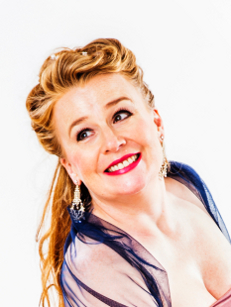 Since leaving the Royal College of Music Angela Henckel has enjoyed a varied career ranging from singing Gregorian Plainchant to Musical Theatre and from Baroque recitals to contemporary Rock opera. Angela has given performances of St Matthew Passion with Roger Norrington, Dido and Aeneas in Japan with the Purcell Quartet, has toured Canada with Schola Gregoriana of Cambridge, Israel with the Kibbutz Chamber Orchestra and Germany and Spain singing St. Matthew Passion with the English Concert.

Angela is in great demand as a recitalist and cabaret artist, and has performed at the Wigmore Hall, Purcell Room, and for many music societies and festivals and parties throughout the UK. Angela sings with the Choir of St. George’s Hanover Square and is a soloist on a disc of Christmas music recorded by the choir.